A tale of two doves: one out of the cage, one more to go; expect some “fake news” on trade rapprochement

The suspense is palpable. While the dove in Jerome Powell seems to be peeping through and has brought a little of that much-needed oomph back to sagging equity markets, the market is now waiting for the white dove in US-China trade relations to flutter through and fully rekindle animal spirits.

Our house view is that Mr. Trump’s ego has been badly bruised by the sharp reversal in US equities. Not very long ago he was pointing to the unrelenting bull market as evidence of his superb economic stewardship. With the Democrats having taken over the House, Trump’s former lawyer Michael Cohen admitting to fibbing about his client’s involvement in Russian property deals to save him from scrutiny, Wall Street now singing a chorus about US economic growth having peaked and the stock market reeling from a flight from tech stocks, Trump badly needs a win. Hence, we expect some sort of announcement at the G20 summit (hosted using IMF bailout money) in Argentina on the trade front which will be engineered to lift investor sentiment. It will probably be cosmetic in nature just to make for good “optics” as they say in Washington these days. Something to lift the dark specter of an indefinite and escalating trade war. Something just short of being labelled “fake news” but effective enough in the near term to buy Trump some time to work out something more substantive or score victories in other departments (think Central American refugee caravan).

So, perhaps a short-term boost to global equities next week is a real possibility. Vietnam will be no exception despite the country being an outsized long-term beneficiary of the US-China trade spat.

Of course, Trump could well be emboldened by having “won” a victory over the FED and be willing to up the trade ante on China. I’d put a 30% probability on this but never discount the black swan especially when you are relying on Trump to deliver a white dove.

HPG: The steely silver lining to a darkening cloud.

HPG, until recently a darling of most analysts and among the most widely and deeply held stocks among large funds in Vietnam, is under a sledgehammer. With steel prices in clear correction territory across Asia, investors are pricing in a spillover into Vietnam even though domestic steel prices appear to be holding up and demand is still strong.

We ran some numbers to see how HPG’s valuation is impacted by international and domestic steel price movements and the evidence is clear as day. In fact, the recent pull back could even be justified on the ground the HPG’s valuation had run ahead of the steel price upcycle in late 2017 and over the first half of 2018, helped in no small part by the overall expansion in market-wide valuations over the same period. So some retreat in valuations was to be expected. But the tumble in Chinese steel prices is clearly taking HPG’s PE multiple down with it. 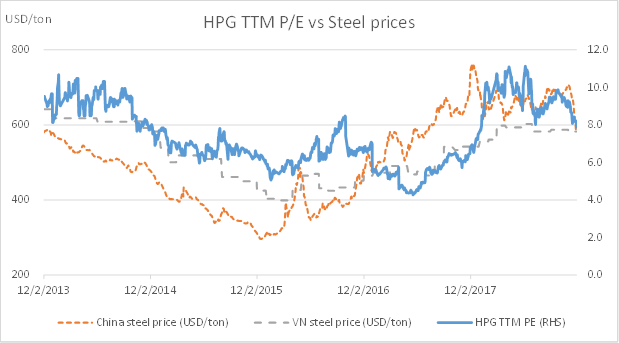 Chinese steel prices are down 11% since the start of November

HPG’s share price has fall by 16.8% over the same period.

My reading: Investors are reacting to Chinese steel prices as this is a lead indicator of the domestic steel price trends (also borne out in the chart above) – weakening Chinese steel prices point to building oversupply there which, combined with the sharp recent devaluation in the RMB, could mean that Chinese steel could well find its way into the Vietnamese market, despite hefty import tariffs of roughly 12-20%.

Combine that with recent news that the Chinese government has relaxed environmental norms on steel production (no production bans in winter + ability to use lower grade iron ore) means that Chinese steel producers are likely to become more competitive relative to Vietnamese producers and also reverse the recent weakness in low grade (58% Fe) iron ore prices which have been padding the margins of BoF producers that use high blends of low grade iron ore (i.e., HPG).

All this at a time when HPG is about to launch a record amount of new long steel capacity into the market with the anticipated commissioning of the Dung Quat complex.

All seems awfully negative doesn’t it?

But having barely unpacked my suitcases from a marketing trip in Hong Kong, I learnt that the Chinese economy could be doing even more badly than we think. Fund managers there – who typically have their ears to the ground – see through the mirage of China’s reported GDP growth numbers. With actual growth now estimated to be closer to the 4% mark, and RRR cuts at Chinese banks not really appearing to be very effective thus far, another bout of public spending is a real possibility. And, as always, this is more likely than not to take the avatar of another infrastructure spending binge even if that means kicking the deleveraging can down the road.

With our chart-loving equity sales head Lawrence Heavey recently observing the HPG looks rather oversold (on an RSI basis) and a potential improvement in US-China trade tension “optics”, this might be an opportunity to accumulate on weakness. But keep a very close eye on Chinese steel prices.

A tale of two doves: one out of the cage, one more to go; expect some “fake news” on trade rapprochement The suspense is palpable. While the dove in Jerome Powell seems to be peeping through and has brought a little of that much-needed oomph back to sagging equity markets, the market is now waiting

VNDirect Research Blurb: Capitalizing on your Foe’s Woes + Our Predictions for the Q1 ETF Rebalancing

Climbing into the stratosphere: HVN might have just secured a new multi-year growth engine