You can run but you can’t hide” – George W. Bush to Osama Bin Laden

With the rout in equities and a fresh barrage (should I say Farage?) of bad news, investors are stuck between a rock and a hard place. Celebrity CEO Carlos Ghosh’s recent arrest on grounds of under-stated compensation in company filings is a reminder that the next corporate governance scandal is always right around the corner and seemingly world-class management teams also have skeletons in their cupboards. Add to that Mike Pence’s talk of the need for regime change in China and most US fund managers have penciled in an escalation in trade tariffs come January 2019 as their base case assumption. Negative Q3 GDP numbers coming out of Japan and Germany only added the “icing” on what is already a chilled cake.

While some macro pundits talk about the fact that faltering US growth might make the Fed think twice about raising rates at the next meeting, thereby reversing some of the recent equity multiple contraction, this is a tricky call: the Fed might also be spurred on to restore rates to “normal” levels before the economic cycle turns, thereby leaving some room for monetary stimulus to cushion the impact of the downturn.

Seems like the only thing that would get the equity markets out of the current funk is a resolution of the US-China trade tensions. But that looks rather unlikely for now.

With the VN Index down 7% YTD and around 25% down from its peak seen in Q1 of this year, some stocks are looking like a bargain. But another momentum-driven run looking more unlikely by the day (in the absence of a trade breakthrough between The Donald and Xi), I hold my view that this is the time to get into stodgier names with more predictable earnings streams.

Some of the sheen has come off ACV in recent months but the stock has held up rather well amidst the market-wide rout in October and November. The stock is down only 7% since the start of October versus 10% for the index; in fact in October, itself, ACV was down only 2.8% versus a 9.7% fall in the VNIndex. With the stock being expensive relative to market (for good reasons in my view), you would have thought it would have been trampled by a “flight to value”. But what this shows me is that investors are steering clear of the proverbial “value trap” – the emphasis is on earnings visibility and predictability rather than value for the sake of value.

So is ACV really a good place to weather out the storm? To answer this question, I decided to explore how vulnerable domestic passenger arrivals and international passenger arrivals are to slowdowns in the domestic economy and the Chinese economy, respectively. Since most of the passenger throughput through Vietnamese airports is tourism-related (an educated guess as there is no data on this) and leisure travel sits squarely in the universe of discretionary spending, it would appear to be rather exposed to a worsening of economic conditions. Hence the exercise.

Let’s start with the bad news. As you can see below, domestic passenger throughput growth has a rather weak relationship with GDP growth but was heavily impacted by the sharp economic slowdown of 2012 and, to a lesser but still meaningful extent, by the slowdown of 2009. While passenger volume growth and GDP growth appear to be totally uncorrelated from 2014 onwards, it is important to note that a) 2014 was the year in which a huge amount of LCC seat capacity came into the system (think VJC), which together with record lows in oil prices, led to competitive airfares and a surge in domestic first-time-flyers, b) oil prices rebounded starting 2016 and some of this was passed on to passengers, affecting demand for LCC flights given the high price-sensitivity of this segment. 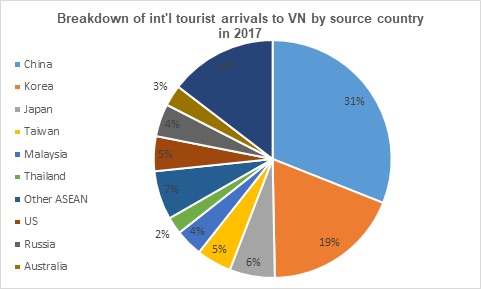 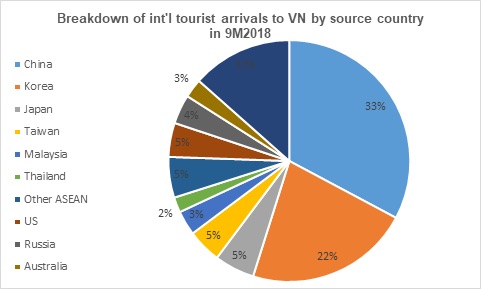 Since Chinese tourists are the major engine of growth in international tourist arrivals into Vietnam (note, all the restaurants I visited on my last trip to Nha Trang now have Mandarin language menus) and, given the sharp deceleration in China’s economy in recent months, it made sense to assess to what extent a continued worsening of the economic climate in China (trade war + continued deleveraging) could empty the beaches of Da Nang or Na Trang.

Now for the good news.

As you can before total Chinese outbound tourism growth has been in almost secular deceleration since 2010 (only partly due to a higher base effect over the years), tracking the glideslope of a decelerating economy. This makes sense as foreign holidays are still considered a luxury in what is still a middle-income country and also given that the Xi’s anti-graft witch-hunt would have dampened appetite for ostentatious polar bear-watching tours in Northern Canada or scuba diving holidays on the Great Barrier Reef. 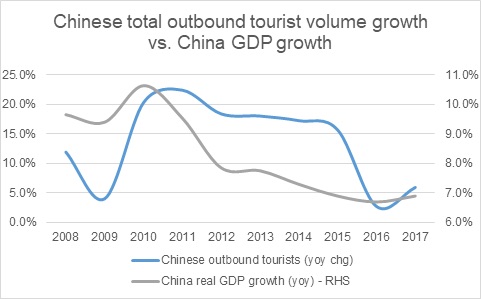 But, I have always held the view that cheap regional destinations like Thailand – and increasingly, Vietnam – have a counter-cyclical element built into their Chinese tourist arrival volumes. Having “tasted” foreign holidays, upper middle-income Mr. Wang and his wife are not going to want their wings clipped by a souring economy. They will likely still travel overseas but will trade down from exotic and far-flung destinations like Paris or New Zealand to cheaper – but still fun – getaways that are closer to home. Since Vietnam does not have a long history of attracting Chinese tourists, I thought it would be more instructive to look at the historical sensitivity of Chinese tourist arrivals to Thailand to the Chinese economy as a proxy, instead. While there is still a lot of politically-driven “noise” here that clouds the relationship between these 2 variables, what strikes me is that from 2011 until 2013, you had a secular acceleration in Chinese tourist arrivals to Thailand coinciding with a sharp and secular deceleration in China’s economic growth. This would seem to support the “trading-down” hypothesis which I extrapolate to assume that Chinese tourist arrivals into VN are somewhat countercyclical in nature. 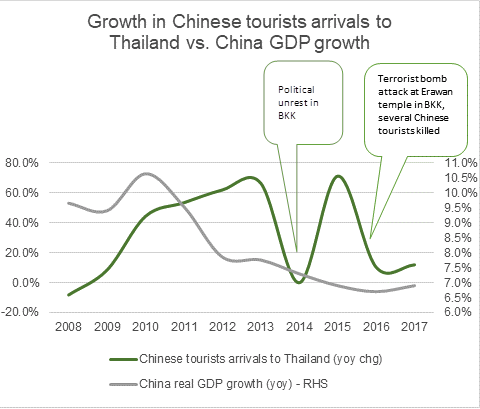 ACV has huge potential to grow revenue even if passenger volume growth stagnates.

Now, assuming that passenger throughput doesn’t grow at quite the blistering pace of the past few years, can ACV still grow its business? I think the table below clearly shows how much ACV is underexploiting its current traffic. ACV makes less than one-tenth of the non-aeronautical revenue per pax as Airports Authority of Thailand (AoT). I would not read too much into the fall in non-aero revenue per pax in 9M18 due to seasonality (international passengers are more inclined to loosen their purse strings closer to Christmas).

Now you might think that, ACV’s ability to close this gap with AoT is subject to government policy around concessions, royalties, etc. Sure, but if visual cues are anything to go by, it is quite obvious to me that better monetization of existing traffic is on ACV’s radar. To illustrate this point, I leave you with a picture of a brand new ACV store I saw on my way out of Phu Quoc airport 2 weekends ago (on my last trip there 3 years ago, there was nothing of the sort). Passenger volume growth slowdowns, notwithstanding, you are likely to see many more of these pop-up over the years. 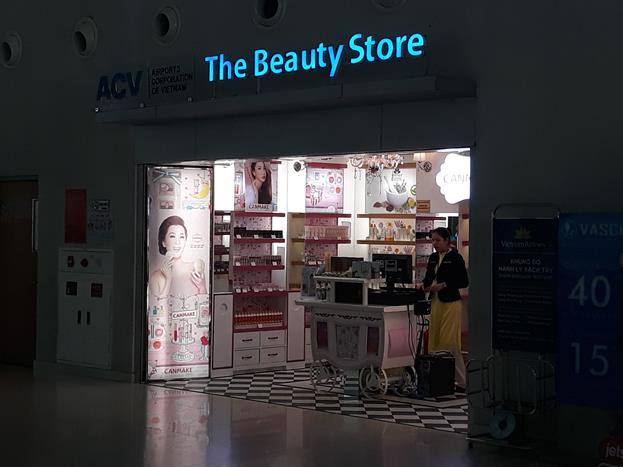 You can run but you can’t hide” – George W. Bush to Osama Bin Laden With the rout in equities and a fresh barrage (should I say Farage?) of bad news, investors are stuck between a rock and a hard place. Celebrity CEO Carlos Ghosh’s recent arrest on grounds of under-stated compensation in company filings is

VNDirect Research Blurb: Capitalizing on your Foe’s Woes + Our Predictions for the Q1 ETF Rebalancing

Climbing into the stratosphere: HVN might have just secured a new multi-year growth engine